At least to me, it felt like the crowd reaction to David Cook’s acoustic set outside the Ion Orchard in Singapore last night could’ve been louder. Or maybe it’s because I saw some of those in the VIP area not really reacting that loudly. But if you’re a fan – and I was definitely surrounded by those last night – this gig is the most. Awesome. Thing. Ever.

“Thank you for voting for me,” the American Idol winner said as he entered the stage. “I need the job.” Accompanied by gutiarist Andy Skib, he launched his eleven-song acoustic set with fan favorite “Declaration”, and he easily paced through his singles, more fan favorites (“Lie”, from the first album, was apparently a popular request during the meet and greet earlier in the day) and the occasional cover, including that ubiquitous “Always Be My Baby” (trust David when he says it’s really popular in Asia) and, for the first time in a live show, a cover of Prince’s “Purple Rain”.

You’d be forgiven in thinking his concert is mostly a treat for the fans. Sure, it is. He’s had a strong following in the region – four shows in Southeast Asia in six months, I must point out. But David has this easy-going, charismatic attitude that doesn’t ward off anybody who just passed by. He’s quite funny. A bit self-deprecating. The fans gobbled everything up, but the others seemed to be into it, too. He was also very much game for anything: that walk down the catwalk – his performance was preceded by a fashion show; it’s a mall event, after all – will definitely go on YouTube, if only for its sheer ridiculousness.

I’m pretty sure David was aiming for an intimate feel, but it was let down by the terrible sound system (or maybe it’s my position by the speakers – I can’t appreciate his voice as much as I should). But points to him for trying, and mostly succeeding. And more points to him for trying that durian pancake, although he obviously hated it.

David Cook sets up as he begins his acoustic set outside Ion Orchard in Singapore.

He is accompanied by his guitarist, Andy Skib. 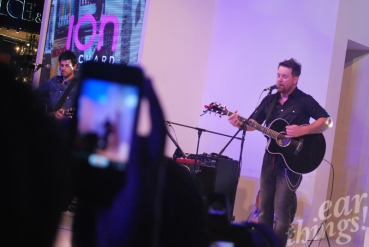 Asia seems to be his favorite destination of late – he’s been here four times in the past six months. 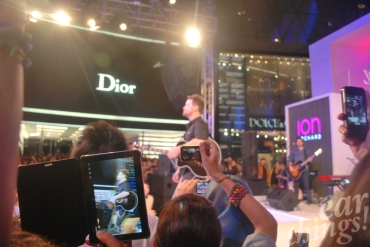 After chants from fans, David walks the catwalk near the stage where a fashion show was held earlier. He later told a fan he wished footage of his walk wouldn’t go online. Then he laughed.

Andy sang a bit, but here he decides to play support… and wipes his face.

David ended his set with his first post-Idol single, “Light On”.

And then it’s goodbye…

…but not exactly: there’s an autograph session, and then there’s this durian pancake, which he gamely tried… but didn’t seem to like that much.