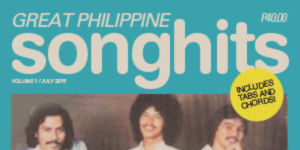 “Luha” by Aegis | Here’s another shoo-in, and another artist whose many hits could have easily made it on our list. “Basang Basa Sa Ulan”? “Halik”? “Christmas Bonus”? Aegis, arguably the Filipino equivalent of Heart, have not done anything new in a while. (Their last album, released in 2009, were mostly covers) and yet, despite performing the same songs over and over and over again, they still endure. Perhaps it’s the combination of the Filipino’s love of ballads and karaoke. The Sunot sisters have a vocal power that doesn’t quite go away, after all, and it’s become a standard for those hoping to join singing shows on television. Of course, they songs also have wide appeal – not very frilly, but goes straight to the bone. For a moment, it seems it doesn’t matter if Aegis sing the same songs again and again. (Thanks to Sudoy for the suggestion.) [NB]