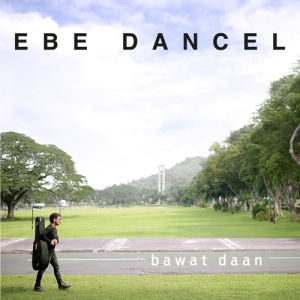 The toughest part of reviewing Bawat Daan – the second solo album from former Sugarfree vocalist Ebe Dancel, and his first with Star Records – is the fact that he’s, well, the former vocalist of Sugarfree. It’s not that my head cannot reconcile Ebe the rock band frontman with Ebe the sort-of middle of the road balladeer; his voice was always comfortable, yet capable of anthemic power, and that’s how Sugarfree sustained a wide appeal even after the retreat of local alternative to their gigs up north. The same goes with his solo work, the most recent of which finds its way in Bawat Daan: his theme songs for television and film (notably that buzzy smash Heneral Luna) may be a bit of a cliché, but benefit from the delivery. In between those theme songs, and three unnecessary Sugarfree covers (although the now orchestral “Huwag Ka Nang Umiyak”, with KZ Tandingan, adds a new dimension) are new ones that show Ebe at his best: relatable writing that doesn’t always turn to sentimental gloop, aided by this mix of hope and ennui that only he has managed to pull off. “Dapit-hapon”, for instance, is classic Dancel: a quiet start, a soaring climax, a good feeling at the end. It’s a shame I had to go through a lot of filler before getting to the gold. [NB] | 3/5