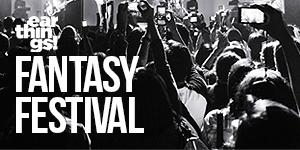 Back for a third year, it’s the earthings! Fantasy Festival, with four stages of live performances that’s all just happening in our heads. Like in the past two years, the earthings! team (and some friends) were tasked with picking five acts that they’d love to see live – and, to fit in with the metaphor, have perform on their own festival stage. We kick off with contributing writer Dexter Tan, who goes (almost) all-female for his stage – and throws in a local act for the first time in the festival’s history.

This year’s line-up marks many firsts: not only is it the first time we’re featuring a local act, it’s also the first time I actively tried to feature an all-female vocalist lineup (though I guess I sort of cheated with the last two picks). Unlike the previous years, however, where I tried to feature a slice of everything – be it a genre I didn’t particularly like or a band I simply disliked even though it came from a genre I’m used to listening to – this year was pretty much a lineup of personal and selfish picks, where I simply showcased songs which I remember gave me a warm, fuzzy feeling (hint: teary-eyed) after hearing. [DT]

I remember looking up Chlöe Howl after hearing “No Strings” in Kickass 2. After watching a couple of her covers and reading up that she was, at the time, 16 or 17, I felt in awe of how a voice like that could come out of, what I thought back then was, a “kiddie-sized body”. Since then, I’ve watched (and awkwardly danced along to) a couple more of her performances, each one growing more sultry and sexy than the previous one. Oh, and did I mention she’s gone on to be shortlisted in BBC’s Sound of 2014 poll? Her album has been in the works for a long time now and it honestly can’t come quickly enough.

Oh Land is a musical chameleon. I remember listening to one of her albums a couple of months ago and never being able to put my finger on just what genre to categorize her into. Right when you’ve settled into tagging her as sounding like a Robyn ripoff, she sucker-punches you with a ballad that sounds like it came right off a cheese flick, right before proceeding to double-cross you with a complete bubblegum of a pop song. She does a lot of styles and she does them well.

I think it’s safe to say that we haven’t really even begun to scrape the surface (heh!) when it comes to the indie local music scene. Take Niki Colet, for example, and tell me how it simply doesn’t astonish you that she’s not already invading the local airwaves and serenading our collective morning bus rides. The boss would tell you it’s because local radio is awful, and he’d be somewhat right. To realize we live in a world where half of the station’s three hour sets are plagued with multiples of Taylor Swifts and Justin Biebers, and the other half’s consist of the Richard Poons and the Jed Madelas of the world, cycling through and gargling every conceivable 80s ballad in the songbook, that there’s so much of this talent going around simply boggles the mind. I know people have every right to like what they like, but surely we’ve tiptoed around the edges for far too long that I think we owe it to ourselves to finally get our feet wet and give a chance to the rest of the iceberg.

There’s something about upbeat sounding songs that disguise a grimmer and more crushing message than its melody would lead you to believe. I’ve always been a fan of that kind of music, and that is why I’m a fan of the New Zealand brother-sister duo Broods who delivers them in spades. I find that it’s easy to get lost in the synths and the beats that feel like they’re going to consume you, but I find that it’s equally easy to get crushed by the vocals of Georgia Nott, who delivers her lines in the rawest and most heart-wrenching way I can imagine. So much is evident in the live rendition of “Bridges”, where she goes through the entire song with just a piano. This duo has been in my playlist for quite some time now, and I don’t intend to burn that bridge any time soon.

In my mind, a line-up such as this was always going to end up with me having to pick between Daughters and the xx for the main act. Three reasons why Daughter went over: one, the xx already performed in Manila (which I missed, but I’m sort of over it anyway). Two, I remember having a massive brain fart and felt excited for thinking it was Daughter coming over for a gig last 2014 before realizing it was Chvrches all along (which I also missed, ironically enough). Three, the third xx album isn’t due to come out until later this year, whereas Daughter released a new record just a couple of weeks ago. Speaking of which, choosing “Youth” to showcase the act when there are ten new delicious tracks from Not to Disappear, the trio’s sophomore album, almost makes me feel like I took the easy way out. And yet while it is true that the new album sounds much more aggressive and refined when compared to how their debut album practically wallowed in its own melancholy, “Youth”, and the songs from their first album, was always going to be a personal and selfish pick, not because it was a technical perfection, but because it is a song (and an album) that evokes memories of me walking along an empty hospital corridor, listening to this, wallowing in my own melancholy. And music that speaks to me is what I feel music is supposed to be.

[Tomorrow: Allene Allanigue returns to the Fantasy Festival with her five acts.]

One thought on “2016 earthings! Fantasy Festival, part one: the White Noise stage”