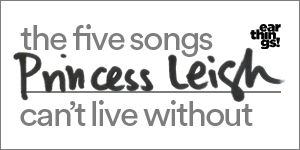 This is the second installment of The Five Songs I Can’t Live Without, where we ask people (of interest) about, well, the five songs they can’t live without. This one had some extraordinary timing going for it: the day we considering inviting Wish 107.5 DJ Princess Leigh is the very day she was doing her last show on the station. (In case you’re wondering, she’s the one enthusing about the NBA season when we live-blogged the station two years ago.) Yes, the station plays classic hits most of the time, but you’d see her enthuse about local indie acts too, especially if you follow her on Twitter. A perfect fit, we thought, so we asked her as she wrapped up her last show – and now we the five songs (the former?) Princess Leigh can’t live without.

I fell in love with the song the first time I heard it. Personally, it’s the song with the best intro ever. I’m sure there’s something out there that’s better for others but this is it for me. It’s part of the Five Songs I Can’t Live Without because it has this calming effect on me which comes quite handy on occasions when I don’t have a good grip of myself. I would just have this on loop and suddenly, my feet are back on the ground.

Let’s just say, I’m saving this song for that one person.

Favorite Bullet Dumas track. The first gig I ever went to was Bullet’s and when he performed this song it was extra special because he sang it with Clara Benin. One of the most beautifully written love songs – and not a day goes by that I don’t listen to this song.

“Is This Love?”
Allen Stone (originally by Bob Marley & the Wailers) | live performance

For me, this rendition of Bob Marley’s “Is This Love?” is what love sounds like.

Abbey Road was the first Beatles album my dad got me and this was my favorite song on there that started a beautiful love affair with The Beatles and old music.

[Leigh was talking to Niko Batallones.]