There were a few snags as we arrived at the Circuit Mall in Makati for the first Bandwagon Music Market in the Philippines. One, Shalla, who works the night shift, did not get any sleep, so I knew that we would have to skip some of the acts at one point. Two, while driving to the venue was hard, finding the Power Mac Center Spotlight was particularly difficult – although I blame it on the mall for not putting signs. It is hard to get to. I knew it was at the third floor, but we went up the wrong escalators and ended up at a chapel. Turns out we should have taken another set of stairs.

That was, of course, a minor quibble. Music fans came in droves for the first major event mounted by the Singapore-based website in the country. (We must point out, however, that it isn’t the first they’ve done in the Philippines – they did something in the lead up to last year’s Wanderland. Still, this is a bigger hello on their end.) The line-up was an interesting mix of indie veterans, overlooked names, and a couple of exports from Singapore: it may have looked random, but it served to highlight just what the indie scene here – and elsewhere – has to provide, in a way that doesn’t alienate newcomers.

The “market” bit was represented by the booths: Spotlight was filled with people selling instruments and equipment to photo and illustrated prints, and even some albums too – notably, Johnoy Danao was there to sell his records, including the latest, Salubungan. (It was also nice to meet a bunch of people I’ve met online because of this blog. Hello, John. Shalla bought a print of his Bon Iver photo from Wanderland last year.) But the crowd was there for the music, and once they were settled into the bean bags, the tunes went on.

Shadow Moses kicked off the proceedings, and then I finally understood the hype: their half-hour set (everybody had half an hour) was relaxed yet hard-hitting, the clear rapport between rappers Cyrrho and Ninno (producer Six the Northstar rounds them off) showing through, concealing how the set (complete with cowboy hats, in a song that also features songstress A Problem Like Maria) operated like clockwork. Following them was Intriguant, the first of two Singaporean acts who flew over for the event, who dialed things down with his enigmatic electronica.

Kicking things back up again was Beast Jesus, whose loud set literally shook the venue. I was seated on the floor, just letting myself soak everything in, and I was definitely awash in reverb and scuzz. Again, tight energy, but having all those faders up and being actually there is an experience you can’t quite replicate on record (and I enjoyed their EP). Runway Crimes followed them with a set that showed off their soaring musicality, a throwback to the past with their distant yet charismatic vibe on stage.

And then the fun started. Maybe the crowd got too relaxed, but Oh, Flamingo!’s request for the audience to stand rather than sit – those bean bags were comfy – changed things, a clear division between the first third and the second. I’ll admit to being skeptical of the band’s sound at the onset, but they’re a fun band to watch live, their modern take on surf music standing up to what, in my head, initially, was your typical indie sound. Interestingly, the audience weren’t as lost in the haze as the band was – most inhibitions were left on the door and you could not resist tapping your feet. (Admittedly, I spent a considerable amount of time watching their shoes.) I was converted enough to actually seek out their album, but circumstances – I was taking photos of B.P. Valenzuela – meant I never got to buy anything. Billie, if you’re reading this, please accept my apologies… and my order for two copies.

Inch Chua was the second Singapore export, although it isn’t her first time in the country. While I’m relatively new to her music, I enjoyed listening to her radio show on Lush 99.5 – somehow that told me everything I needed to know about her stuff. I don’t think we can call her music quirky as it is informed: I saw shades of Karen O without the tendency to be avant-garde weird. She clearly was having fun too, even going as far as singing a snippet of this Filipino song (I couldn’t tell what it was, though) in between “talaga?” Why I didn’t take a photo with her, I don’t know. But I did shake her hand, her apologies for it being wet notwithstanding.

B.P. Valenzuela followed, and I was keen to see her in her natural habitat – the first time I saw her live, it was with a band, and I don’t think her sound translated well. I think she sounds intimate gigs better. Her presence is one you would not immediately notice – she was at the venue from the beginning of the event; she, um, blends well – but get her up on stage and, even in that cap and big jacket, she owns the room. Maybe it’s her status as one of the scene’s darlings, but she the crowd was enraptured. I don’t often go to gigs for many reasons, but I was glad to see her in that setting – and on her last gig for at least two months, too. (And also glad to hear her cover Radiohead‘s “All I Need”, one of my favorites from In Rainbows.)

I was also looking forward to Bullet Dumas, whose arguably short set – three songs, albeit long ones; he can get lost in that guitar – was punctuated by those funny asides. He has a way with words, yes; the way his lyrics run around the meadows are evident when you hear his songs in whatever form. “Dapat ina-advertise natin ang Summit,” he once said in a break between songs, drinking water. “Sponsor ba natin ang Summit?” While I only heard three songs, I think it was enough to show off not just his music chops but his sensibilities off stage. I was too shy to say hi to him.

The final third of the event kicked off with CRWN, who once again dialed things down with a very chilled set that was, admittedly, hard to photograph. I mean, the lights were right, but my camera skills weren’t. Shalla was no longer handling the camera – she was so sleepy she returned to those bean bags. We knew it was time to go home, which was a shame, because I was looking forward to reassessing Tom’s Story – now I know when to scream “oy!” – and, finally, Eyedress, that enigmatic artist who closed the event. I saw him enter the venue during B.P.’s set, and I noticed him playing with the iPad at the Power Mac booth while I was taking photographs. I wanted to see him live because, frankly, that is a rare opportunity. The only thing I know is, he ended up getting the mixer wet with water. [NB] 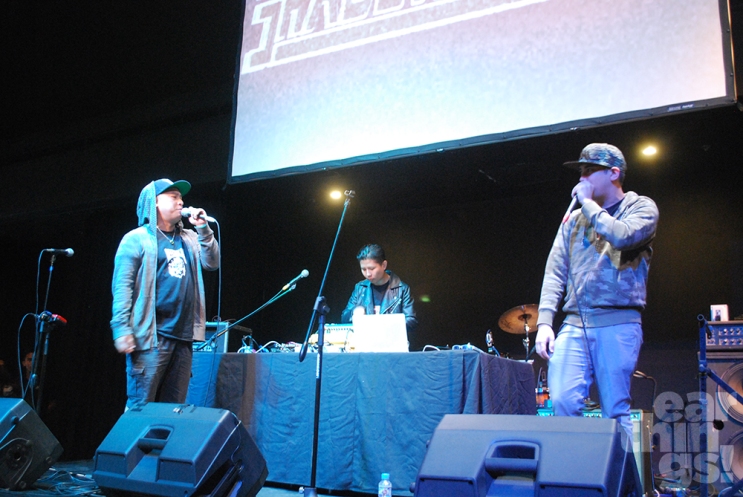 Shadow Moses is joined by A Problem Like Maria for the first live performance of “Doomtown”.

Singaporean producer Intriguant was one of two acts who flew over for the event. 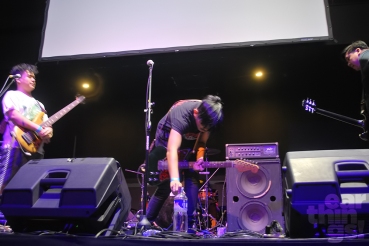 The band just released their first EP, In Various States of Disassembly, for free online.

Runway Crimes heads to the Bandwagon Music Market before the release of their debut album. 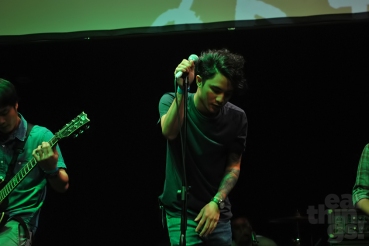 Oh, Flamingo! bassist Billie Dela Paz got my attention. I blame the shoes. 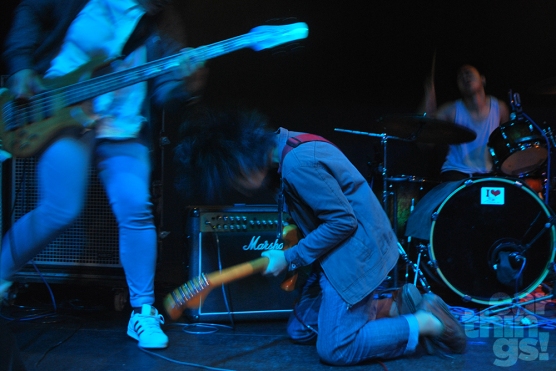 Howard Luistro gets on the floor during Oh, Flamingo!’s set.

Singaporean songstress Inch Chua sets up before her set.

Inch is one of two Singaporean acts who flew over for Bandwaon Music Market. 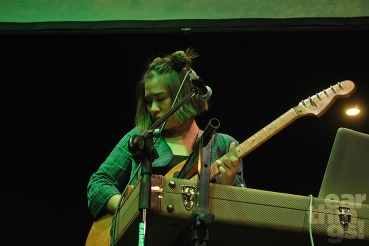 Unlike most, we became fans of Inch after her Lush 99.5 radio show. Talk about circles.

Indie darling B.P. Valenzuela is no stranger to Bandwagon events, last performing at their Riverboat event in Singapore.

B.P. revealed that she’s working on a new album, expected to drop in March.

She’s definitely got the crowd… 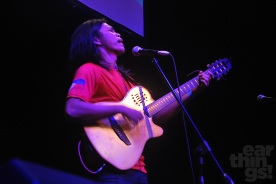 His witty asides and masterful lyricism got the audience cheering.

CRWN ushered in the chill side of the event (although Tom’s Story would kick things back up a notch after him).

Unfortunately, we had to left at the end of CRWN’s set…

[Photography by Shalla Yu and Niko Batallones. Our thanks to Bandwagon for allowing us in.]

2 thoughts on “Live things: coming together at the 2016 Bandwagon Music Market”