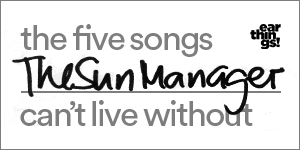 From my nascent time directly observing the local indie scene, April Hernandez is one of its quiet yet most effective workers. While she does a bunch of things for other artists, you more likely know her as TheSunManager, whose music bursts with an effortless optimism. On Friday she will release her first full-length debut, Worth, and we’ve taken the chance to ask her about the five songs she can’t live without. Her selections have actually surprised us – and it’s a good thing, we must add.

I grew up listening to this song when I was 14. It was the era of MySpace music and pure volume and I was just starting to really explore different types of music. This song just really stuck to me because of how powerful it is. Jim Adkin’s earnest and genuine delivery makes it even greater.

“Bright Lights and Cityscapes”
Sara Bareilles | Once Upon Another Time (2012)

I think they live recorded this track, that’s why the singing isn’t the cleanest or polished as most recordings should be. But, that adds more honesty, and I think it was a good call to make it sound as human as possible. Sometimes, listening to this song makes me want to cry. Sara Bareilles is one of my heroes. Her piano here inspired me to write my song “Empty”.

Ben Gibbard’s writing lives in a special space in my heart. His imagery in this song is so on point and the music ties up with it elegantly. The last line “Love is watching someone die.” is so simple yet bears such great weight. This song opened my eyes to being observant of the world around me; looking closely at things that people don’t usually see.

I made a cover of this song a few years back. That opening guitar riff that plays throughout the song tugged something inside me. For me, this song greatly represents that being yourself is enough. The grand music and the ambiguous words draws me in to the mystery it really has. What you’re really sure though is the feeling that everything’s going to be okay.

This song never fails to make me dance and feel things. I feel like when I listen to this, I can “run away” with someone and just be vulnerable. It’s gonna be messy, and complicated, amazing, and chaotic, but that’s the beauty in it; in life. Plus, Troye Sivan is such a great role model for the young ones in the LGBTQ community.

[TheSunManager will launch her album Worth on 10 February from 21.00 at Route 196, with support from Twin Lobster, Reese and Vica, Fools & Foes and Tide/Edit. April was talking to Niko Batallones.]