David Cook’s concert at the Ion Orchard in Singapore was the second gig we wrote about on the blog (the first was Keane in Manila) and to help I tangled myself up some of my friends who are fans of David himself. I met them in my past life, all online, although I’d meet some of them in person while watching Allison Iraheta. Anyway, this is Imogen – that’s a pen name – behind the camera.

You know how we Filipinos love to make foreign artists try local delicacies here? Allison loved adobo, while many others were (not?) so lucky and got to try balut. They also did that in Singapore: here’s David Cook trying a durian pancake.

Mika is another one of my friends from the David Cook fandom, and an important part of earthings! lore. When I found myself waiting for Dia Frampton to arrive at the Hard Rock Café for her first gig in Manila, she pointed out that I should have a Sharpie with me, at all times, for situations like this. She then offered to buy me one.

And that’s the Sharpie – or, as I call it, the Ceremonial Dia Frampton Sharpie – with Dia signing my copy of her debut album Red. I’ve since had a lot of other famous people use this Sharpie. Fast forward a couple of years, and Reese Lansangan would learn about that marker she’s using to sign my copy of Arigato, Internet! – and she’s a wee bit giddy about it.

We went to the Jack TV MAD Fest solely for Kimbra. We were so early we got to stand right behind the barrier. We weren’t so early, though. We met Dale at the queue before the VIP entrance. She was waiting an hour and a half before we arrived, and got so lucky because she managed to have a three-second conversation with Kimbra. If we were there, I would’ve had my CDs signed. Dale, for some reason, didn’t have her CDs with her.

The first time we got a press pass to something was when the band formerly known as Up Dharma Down performed for the launch of the OurSingapore initiative (including a new song, “All The Good Things”) at 12 Monkeys. They remain the only artist I have ever interviewed on the blog. As for that fourth “bouncy” record, we still wait. 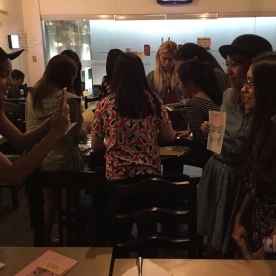 Reese Lansangan is the person that kicked open the door – if not for her (or us covering her) we wouldn’t be a little more confident covering local musicians. Shalla was the first to write about her, back in 2013, but I was the first to meet her, when we covered her solo art exhibit launch the following year. Shalla finally met Reese when the former took part in the latter’s collage-making workshop – and I was there to, I don’t know, say hi. Oh, and we found out about what would become Arigato, Internet! on that date. (Side note: somewhere on Reese’s phone, I think, there’s a selfie of the three of us. I wonder where that is…)

Fast forward five months later and Shalla and I were getting an advance listen to Arigato, Internet! – again, one of the rare times we got to do so. We both wore maroon on that day, by coincidence.

While our Seoul trip was primarily a vacation, I took the chance to finally dive, face first, into K-pop. I took this photo at Gangnam, as we traced our way to the headquarters of the major record labels. On our tail, coincidentally, were these two girls. I guess they were dismayed to not find SM’s headquarters, but were relieved to find JYP’s.

We covered one night of the Gourmand Market at Bonifacio High Street, where TheSunManager, Fools and Foes and Two Nickel Dime performed. I never got to write about it – this was the time I was moving towards less review-y gig reviews – so my photos of the acts stayed on my archive. Now, one of my favorites: a photo of Fools and Foes’ Isabelle Romualdez, with her back to the camera, in between songs. 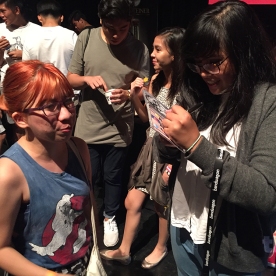 When I hit the shutter, I was waiting (a bit awkwardly) to have a chance to speak to Oh, Flamingo! bassist Billie dela Paz at the Bandwagon Music Market last October. I’ve just seen them live and was bent on getting their EP (two copies!) for the care package we were sending to Zaty, our friend in Malaysia. Would’ve been nice to have it signed too, but a series of unfortunate events meant it was not going to be.

Eyedress was the last act at the Bandwagon Music Market, but I never got to watch him as Shalla was running on 30 hours of no sleep and really was getting tired. I did, however, have a photo of Eyedress, mucking around at the Power Mac Center booth. Not the best of photos, but I had to do something.
#earthingsx5David CookDia FramptonEyedressFools & FoesOh, Flamingo!Reese LansanganUDD (Up Dharma Down)

Five years in: (some of) the earthings! story in photographs

Honestly, there really isn’t a lot of story to tell, unless I decide to act like a really big thing and insist that the mundane things earthings! has done over its five years of existence is worth telling. But isn’t it fun to be able to post a photo album of scenes captured from those five years – at least scenes that don’t involve me writing paragraphs in front of a laptop from my so-called desk, or sometimes at various hotels across the region – and say something about the “story” of earthings! across its five years of existence? Yes, right? So, well, here it is – a slightly random compendium of photos, of the people we met, the people we became friends with, and in between, some photos that didn’t quite make it to these pages. This is, after all, a personal blog masquerading as a music blog. You get the idea. [NB]

One thought on “Five years in: (some of) the earthings! story in photographs”