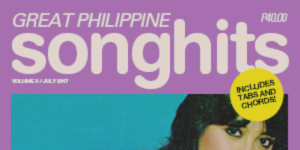 “Sumayaw, Sumunod” by Boyfriends | Sometimes I feel bad for Boyfriends. People – me included, in the past – have confused their songs with VST & Co.‘s. They did come out at the same time (were they a direct response to VST?) and had disco-influenced songs, although where VST & Co. played with the musicality of their band, Boyfriends emphasized on the vocals, making them closer to the Bee Gees. Perhaps it’s just me, but that meant I don’t remember most of Boyfriends’ songs – except for this one, because it is a good floor filler, and in the tradition of the Manila Sound era during the 1970s, has extra references to the act of listening to music and, in this case, dancing to it. There’s something really innocent about those songs. Maybe it’s rose-tinted glasses, maybe it’s my lack of connection. It can’t be rose-tinted glasses, though. It was the 1970s. Things only looked great. [NB]