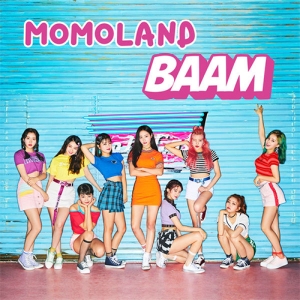 I never thought I’d ever review a Momoland mini – song reviews, yes; album reviews, no – but, well, here we are. The girls’ breakthrough early this year has boomeranged to outside Korea, leading to a debut in Japan and, as we all know too well, “Bboom Bboom” being very ubiquitous here in the Philippines. They’ve taken notice – why else would Nancy hold our flag on their new MV? – and so we have Fun to the World, the record nobody expected, at least not at this time. I won’t take the album’s randomness against them; it really is just how K-pop releases are, for the most part. That, and this is the group clearly cashing in on the popularity of “Bboom Bboom”. New single “Baam” is also produced by Shinsadong Tiger; while it lacks the killer instinct despite being structured way too similarly to its predecessor, it can be a grower. It’s the second track you ought to pay attention to: “Very Very” is coy the way Stellar’s “Sting” is, which to me is pretty high praise. But again, keep in mind the circumstances behind this record. Let the girls have their moment; when Great! was released they were accused of manipulating sales records to top the charts. Their agency’s defense: “we’re embarrassed that we only printed this many copies.” This time it’s different. [NB] | 3/5