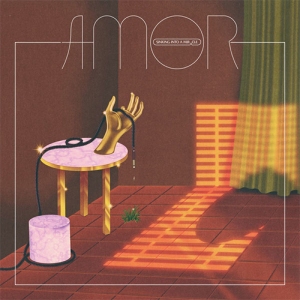 Amor is a supergroup, sort of, although if your orientation is relatively mainstream indie music the only name you’ll probably pick up is Paul Thomson, drummer for Franz Ferdinand. Led by Richard Youngs, with an assist from visual artist Luke Fowler and composer Michael Francis Duch, Amor specializes in what I’d call loose disco. Loose, because Sinking Into A Miracle doesn’t have – at least initially – the snappiness you’d expect from a floor filler. The beats are recognizable, but there’s a folksy thread that both undercuts the stereotype and, albeit slowly, reveals itself to be more of background music for those days when you’re looking to be contemplative but don’t really want to look like a loner. So, you have five tracks across almost 40 minutes – the longest runs for 13 – which feel like a trance the deeper in you go, with Richard’s incantations fading as the interesting arrangements pick up and move you in unexpected directions. Also, it’s a jam, so nothing feels precise, but everything seems deliberate. Loose, as I said. Perhaps not disco, but that’s the best description I have. And yet it goes further than that. [NB] | 3/5