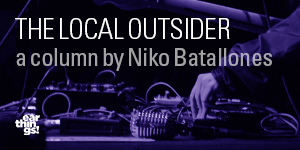 So, Dicta License released another single a few days back. At this rate, I won’t be surprised if there’s an album in the offing. We need them back, God knows we need them back: a group who’s not afraid to be political, in times like these when musicians would rather play it safe to please everybody. But then, I’ve been thinking about how their popularity came at a time when we were generally more receptive to local alternative. I mean, we are still that now, but we’re fragmented, and we pay attention to our niches, and also, whether we admit it or not, we shut out anyone whose opinions diverge from ours. If ever they release an album, I feel it won’t make the impact I hope it would. But does it matter?

Okay, that’s a weird prologue for this month’s Local Outsider. To be honest, there seems to be a lot to write about. You know the tendency of acts to release stuff at the end of the month, just after I’ve written the column. Well, today is literally the end of the month, and I am still playing catch-up with some of the new releases. Also, this month I seem to be more aware, even if I’m writing this at the very last minute. Anyway, Bita and the Botflies (who we featured in this column before – also, hi, Kevin) released a new single two weeks ago. It’s still as lovingly sinister and weird. But we begin with another act who I’ve been meaning to listen to…

I think I’ve spent the past seven years waiting for the beginnings of another golden age in Filipino music. I don’t want to make predictions, but perhaps we’ve never been closer than today. It all feels genuinely exciting, and the belated embrace of streaming services mean we all get to join the party, somehow. Also, the “boutique” record labels are really buzzy, and I’m not just talking of Terno Recordings and their contemporaries.

We mentioned the Botflies earlier – they’ve been snapped up by Kean Cipriano’s OC Records, also the home of Unique Salonga and, intriguingly, Johnoy Danao. On the other side, there’s Ely Buendia’s Offshore Music, now the home of One Click Straight and Eyedress. And they’ve also snapped up Ena Mori, who I now admit I should’ve listened to much, much earlier. There’s nothing new about her sound, but I am all sorts of intrigued about her package. Clubby, slightly aesthetic as an adjective, but feels just slightly 80s without the baggage it usually brings. (Take “Walk Away”.) Perfect for six in the evening; much better if traffic in Manila is much better than it is now. That’ll take years, but when that subway fully opens, it will work more.

Back to the labels – all these environments that encourage a more curatorial, deliberate approach to music can only be a good thing. But I’m not hopeful about more people joining the party. Spotify is not enough, guys. You’ll need radio airplay, and not just on Jam. But whose minds are we going to change about this?

Also giving me a bit of 80s atmosphere is Our Inflatable Friends, but then you might argue it’s a stretch. Now, they only have three songs out right now, so it’s much easier to make sense of this group. Is it right if I compare them to the decade’s sophisti-pop movement? I listened to “Boy” first and, well, it is kinda close. But the other two singles – “Seven Eleven”, released first, and “Shame”, released just a couple of months back – feel just a bit closer to, but not in the same lane as, the shoegaze movement that straddled the 80s and 90s. Okay, this is me trying to sound like I know my shit. But – and I know I have evoked this imagery before – their music brings me to some vague time in my life where I only had a radio and it was later than usual and I’m not yet home, but I’m in a jeepney on my way home. And I’m sleepy, but that somehow makes the music much more evocative. What would a whole album of this sound like? I’d listen to that.

Finally, because I’ll always be late, Aly Remulla, who followed me on Twitter months ago and whose music I have also been meaning to check out. You know the drill: too busy lately. Oooh, she’s from the south, too. The town next to me? That sounds too stalker-y. Yes, I will continue with the 80s feeling I’ve been running with across this month’s selection. Her voice is what I’d expect to hear when it gets really late at night, to the point that you can technically call it morning. Hey, shouldn’t you be asleep? “Alon” is actually almost three years old (but this video is from last year) and there’s this quality to it I can’t put my finger on. She’s able to shush everything else and force you towards her field of vision. You can’t help but pay attention. You can’t help but wallow in her words, in the way she delivers those words.

Dear “boutique” record labels: when the time is right, and that’s coming soon, please pick her up. She’ll fit in somehow, and effortlessly. But really, aren’t we closer to another so-called golden age than ever before? Sure, we still have to keep our ears peeled, but we’re hearing of more local acts without having to be intimately in the know, in the right circles, that sort of thing. (I’m not writing a lot about the hip-hop acts, for instance, because it’s not my thing, but Wave 89.1 can now afford to have a local chart show, and that says a lot.) May all this not stop in its current trajectory. Also, fuck off, snobs who want everything to themselves and themselves alone.

I’ve written more words than I expected for this month’s column. I had a flat white at four in the afternoon, which I don’t always do. It’s almost midnight as I write this sentence. It all makes sense now, these descriptions. [NB]

One thought on “The Local Outsider #35: Ena Mori, Our Inflatable Friends and Aly Remulla”