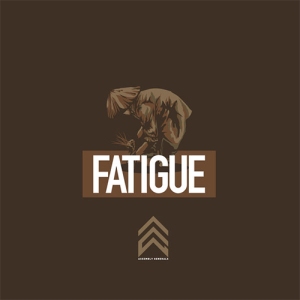 The new album from hip-hop collective Assembly Generals is so powerfully quiet it really takes a while for you to realize it. I think it’s that steady beat that characterizes most of the album. The metronome effect lulls you into a sense of security: ah, it’s all right, this is steady, this is all right. But it’s the little details that eventually fight their way through the template laid down so nicely and effortlessly. Again, it’s that military imagery they’re promoting: the members of one unit working together, but with a dash of class that, one again, lulls you: Switch Toledo and Peaceful Gemini’s interplay, particularly, but also the production, which does not go too far – a temptation many tend to make. Might as well. Fatigue illustrates that pummeling down we all get these days, the sense that everything is overwhelming and we shouldn’t really be fighting all these wars, even if many say we should never back down. It is a record of protest songs, but not entirely: throughout the album you can sense the sputtering and the running on fumes that nobody in this demographic wants to admit outwardly, but everybody is definitely feeling. It’s in the complete change of pace of closer “Tilted Room”, which is not a surrender but an acknowledgment of differences and a statement of defiance. Told you, sense of security. But it tells you a lot without you knowing it. [NB] | 4/5

Hello. Niko here. Our review of the GoodVybes Festival, which took place last Saturday, would be a little different than we envisaged. We planned an essay of observations for the first major (arguably) music festival of 2016. We had a man on the ground: one of our contributing writers, Dexter Tan, bought tickets, making good on his vow to see Chvrches once and for all. And he was there.

END_OF_DOCUMENT_TOKEN_TO_BE_REPLACED

“Kontrabida” by Assembly Generals | Insert “why is Niko still so behind on local music?” comment here. Okay. Good? Okay. Well, forgive me, but you know. Anyway. I’ve had a lot of car trouble the past week, and that means, yes, I had the car for myself, and yes, I had the chance to listen to Jam’s (thankfully now daily) local music show, Fresh Filter. Assembly Generals was on, and I like that they straddle both alternative and hip-hop sensibilities, while sounding like neither at the same time. (Well, I initially described them as a bit reminiscent of Sandwich without the overly earnest undertones. And then I realized this is another Raimund Marasigan project. So maybe an evolution or something.) As it turns out, I’m not that late – they just released their eponymous debut two months ago. But still. [NB]