Surprise. Again. Hip-hop’s (and pop’s, and, really, music’s) power couple return to cap off what turns out to be a trilogy of surprising – both in release and in how it breaks down the barriers and brings them both down from their heights. Everything Is Love is a victory lap, of sorts, between Beyoncé and Jay-Z, a summation of the themes (and thoughts) explored on Lemonade and 4:44 respectively, and a reaffirming of the two’s love for each other amidst all of this, whatever this is. You have a good view of the dynamic – it’s Bey who really gets to show off here, and Jay-Z plays the awestruck guy, like he’s still in remorse – while acknowledging that, through it all, they’ve gone so far to reach the top. It’s an all right record – light, lean, hard but not too hard, even if you think otherwise of trap. I’m just not sure if we need it. Or maybe I can’t really appreciate the message. Everything Is Love‘s intensely personal predecessors had a reason for being, and provided never-revealed insights. This, on the other hand, can feel like a bit of gloating. They’ve shown vulnerabilities, but fuck that, we’re on top. We know we have problems, but fuck that. The surprise release says it all. But again, all right record. [NB] | 3/5

Of course there will be a lot of press around Jay-Z’s new album, 4:44, partly because of its scarcity (it is a Tidal exclusive, for now) and partly because of what came before. The past weekend has been filled with websites breaking down every track, scouring it for meaning. Did Jay-Z’s mother come out as lesbian on “Smile”? What does “Family Feud” have to say about the things his wife Beyoncé’s statements on Lemonade? Does he address those infidelity allegations? I couldn’t get to the album soon enough, so it felt like the non-stop coverage did the job for me – there’s my album review, no need to listen. The hype, while understandable, does not give 4:44 any favors. As much as we want to follow this sort of soap opera, expressed in albums, from one of music’s most powerful couples, it isn’t really the point of the record. 4:44‘s strength lies in its thoughtfulness and contemplation: Shawn Carter assessing his place in the world, talking about his past and present, and perhaps his future, as in the title track, the closest you’ll perhaps get to an acknowledgment of all those rumors, an apology (and nothing more) (perhaps) whose strength arguably lies in its plainness. And then we come in, the mere masses who listen to 4:44 (or read the press, if we cannot be arsed to get Tidal) and assess our place in his world. I think all that hype distracts from the album’s strengths, but then, this is the world we live in now. [NB] | 4/5 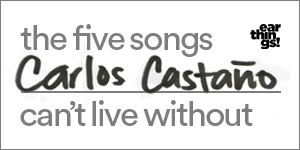 We first wrote about Carlos Castaño a couple of years ago, in which we said he sounded like John Mayer – and got an email in return, saying he doesn’t like him except for his Continuum album. (It is a good album.) He’s released several albums and has worked the live circuit all over the region – most notably performing at the Singapore Grand Prix in 2014 – but after taking a year off, he returned a couple of weeks back with his new album Scratch. Today, he picks the five songs he can’t live without, and yes, they’re completely different from the music he performs – but, in his words, “a lot of our songs start with grooves and I almost always pull from hip-hop to get it with master drummer boy Michael Gemina.”

END_OF_DOCUMENT_TOKEN_TO_BE_REPLACED

If we’re disappointed with the acts coming to the Philippines, then why don’t we make our own music festival? It doesn’t have to really happen – it can all be in our heads. And thus, the earthings! Fantasy Festival was born. Today, Jayvee Sacramento stacks his stage with hip-hop royalty… well, except for a couple of names you would expect on such a list.

END_OF_DOCUMENT_TOKEN_TO_BE_REPLACED

“We need to write the new rules.” This is one of Jay-Z’s boldest statements in his promotion video for his twelfth studio album, Magna Carta… Holy Grail. True enough, Jay-Z wrote the new rules in a marketing stroke of genius, selling a million albums before any physical or digital copy of his new record was made, through a partnership with Samsung. Okay, enough of the intro. Let’s get into the album itself. “Holy Grail” is a perfect opening to a Jay-Z album. Make no mistake, this is typical Jay-Z. The beats are fresh, strong and innovative, thanks to top-notch producers like Swizz Beats and Timbaland; the combination of instruments is superb; and his skills add value to the beats. There are a lot of strong tracks like “BBC”, “Part II” and “Heaven”. The album is good. Very good. However, I won’t put it above Nas’ Life is Good or J. Cole’s Born Sinner – not yet. Some of the songs are acquired tastes and need a few more listens. I never second-guessed Life is Good; my immediate reaction was “holy shit, what an album”. Ditto with Born Sinner. I’m not saying it’s bad, because holy shit, I’ve really waited for HOVA’s next album and this is what I was looking for. It was worth all the hype and marketing. He gave life to his bold statement. However, there are other hip-hop albums that are higher in my Hip-Hop Albums Pantheon. [JS] | 4/5