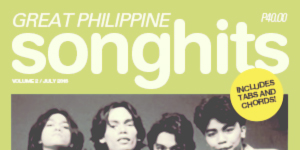 “214” by Rivermaya | Rivermaya is another band that’s had to change due to circumstance, having seen several line-up changes, including three high-profile vocalist changes. That volatility may have diminished the band’s standing today: the exit of Jayson Fernandez in 2011 (after joining the band in a Rock Star-inspired reality show) was a sign that the band’s internal problems was stalling their creative process. But we all still look back at the band’s early years with fondness. Rivermaya is still, to 90s kids, the band that comes second to the Eraserheads, their songs as enduring despite them seeming more, uh, classier, more bourgeois. Rico Blanco‘s songwriting continues to be as potent today as they were in the band’s heyday, and Bamboo Mañalac‘s vocals is as expressive as ever. Again, it’s hard to pick one song that defines the group best – I could have easily gone for “Ulan”, the first song of theirs I heard as a kid; if not for the focus on the classic line-up I could have picked “Balisong” – but “214”, to me, describes Rivermaya best. They’re still going now, of course; with Nathan Azarcon returning to bass duties, here’s hoping they find their footing again. [NB]

“Umaaraw, Umuulan” by Rivermaya | Adrian‘s back after a bit of an absence, and he sort of explains why in his latest song recommendation. Well, you know this song: the lead single of their 2001 album Tuloy ang Ligaya, and for some reason, the one song whose music video, for me, reminds me of MTV Philippines (when it was on free TV). It soundtracked his “academic time crisis”, to put it in his words. “I heard it one evening as I went home,” Adrian wrote. “I suppose it’s from a [tricycle]. I heard the lines ‘bukas sisikat din ang araw, ngunit para lang sa may tiyagang…’ From that time I carried the song with me in my daily routine. I’m thankful I’m now done with what has to be done.” It doesn’t sound as dramatic as it initially should, but well, it is a good song, a bit of a precursor to Rivermaya’s mid-00s peak (which would come with Between the Stars and Waves) and, well, that rain theme. [NB] (Have things I should hear? Drop me a line here.)