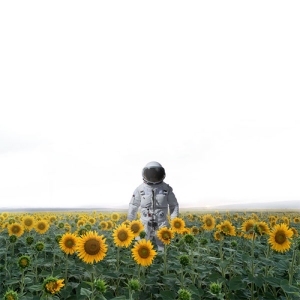 There’s a point in “The Astronaut”, which marks the halfway point in Runway Crimes’ Familiarity, where the band suddenly changes gears and I felt quite confused. Up until that point the record has been, for lack of a better term, consistent: it’s filled with songs you can unleash your emotions out to, the sort you sing in the rain, the sort where nothing else but what you feel matters. Well, all right, the songs are all right. They’re good, fuzzy sing-alongs, the sort I would have enjoyed if I was ten years younger. I still enjoy them now, but in moderation, mixed in with other songs, so everything builds into a nice emotional peak. Familiarity is familiar, but it is exhausting. It’s all upheaval and no return. When “The Astronaut” decided to dial down the atmosphere and slightly up the tempo, I was confused, but I thought the break made the song better. It was a quick respite before all of the same followed, at least until the icky “Unchartered Waters” came on. It is a change of pace, yes – it is pretty much sleazy, or at least trying to be, R&B. I get it’s supposed to mean unbridled passion, but to me, that was confusing. [NB] | 2/5

There were a few snags as we arrived at the Circuit Mall in Makati for the first Bandwagon Music Market in the Philippines. One, Shalla, who works the night shift, did not get any sleep, so I knew that we would have to skip some of the acts at one point. Two, while driving to the venue was hard, finding the Power Mac Center Spotlight was particularly difficult – although I blame it on the mall for not putting signs. It is hard to get to. I knew it was at the third floor, but we went up the wrong escalators and ended up at a chapel. Turns out we should have taken another set of stairs.

END_OF_DOCUMENT_TOKEN_TO_BE_REPLACED 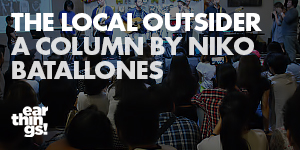 In a couple of days we’ll be heading to the Bandwagon Music Market – that’s 1 October at the Power Mac Center Spotlight – and, since there’s some incredibly good timing at work, and because we can’t resist easy content (hey, we have to admit it), we’re devoting this month’s edition of the Local Outsider to the acts performing there on Saturday. Okay. Maybe not all of them. I mean, we’ve seen B.P. Valenzuela, CRWN and Tom’s Story live; we’ve written about Bullet Dumas and Eyedress a couple of times; and we’ve even tackled Shadow Moses – well, one of their members – on a previous edition of this column. That, and Inch Chua and Intriguant are Singaporean. So. Yeah. I’ve rambled enough. I told you. Easy content.