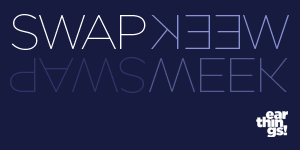 “Break Up For You, Not Yet For Me” by Standing Egg featuring Park Shin-hye | Standing Egg are an indie act. Rainy told me about them ages ago. I’ve seen a bunch of their albums sold in Taipei. And honestly, I have not picked up any of their songs on my own. It takes a bit of goading, eh? It’s obvious their sound would appeal to me: it’s both warm and cool, and all around authentic. (This also explains my thing for Akdong Musician.) Apparently the idea is to invite singers to do the singing for them, but this song I’m posting is a cover. (Original here.) Actress Park Shin-hye hooked up with the gang and rerecorded this song. So that’s how we end Swap Week: with something a bit more down-to-earth, a bit more organic – for most, the complete opposite of Korean music. Well, if your record stores are stuck with the same old boy bands, how would you know, yes? I was a skeptic of Korean music, primarily because I was only exposed to the fangirly side of it. The past three years has proved me wrong, and now I wish people would just dig deeper than, well, Instagram photos of lead singers with spotlights seemingly shining out of their crotches. Ahem, Rainy. [NB]

“Anxious Heart (Summer Love)” by Ulala Session featuring IU | Ulala Session’s a boy band. I know Rainy doesn’t like boy bands (save for Super Junior, for fangirl-y reasons) so this must be something special. The back story somewhat is: the band won TV talent show Superstar K3, during which they battled allegations that lead singer Taq’s having stomach cancer is a particularly elaborate (and fake) sob story. He sadly passed away a couple of years ago, leaving behind a wife and a newborn daughter. This song was recorded before his death, and only resurfaced after some compilation project last year. I initially wasn’t feeling this song – I notice that I tend to feel inconsistent around IU’s stuff – but then it clung to me. And I played it again, and it clung to me deeper. It’s too jumpy for my liking, but there’s an irresistible energy. And then I learn that the music was written by the same guy who did SoYou and JunggiGo’s “Some”, the very song stuck in my head at the grocery a few months back, and the very song that was stuck in my head before writing this. Dammit. [NB]

“Happen Ending” by Epik High featuring Cho Won-Sun | I’m still posting the official music video here, for I’m a sucker for rules, but it’s really more for their other single “Spoiler”; the song only kicks in four and a half minutes into the whole thing. Thankfully the YouTube page of the hip-hop group (and recent Manila visitor) is nice enough to compile their live performances of the song, where they collaborate with several female singers, mostly under the YG banner. Lee Suhyun (of Akdong Musician) is a little too young for this, I think. Lee Hi is cold… and I like it. (Obvious bias.) Minzy (from 2NE1) is similar to Hi, but it’s not as gloomy. Younha surprisingly brings gravitas to this – it’s a mix of acceptance and sadness, and her blending in really plays nicely. And Cho Won-Sun (from Roller Coaster – not a pop band, I must add), who performed it in the album version, gives a wizened feel to the female vocals. Okay. I haven’t talked about the actual song. It’s nice. Or maybe I’m saying this after listening to it repeatedly? [NB]

“Lipstick” by Orange Caramel | Rainy’s written about one of Orange Caramel’s later singles, “Catallena”, before, so I already have a good idea of their shtick: aegyo pushed to the extreme. (Which she likes, considering how every K-pop group’s gone sexy now.) She thinks this After School sub-unit could survive on their own. I think their songs would not have as much of an impact without the visuals. Not a slight, but it is the nature of aegyo, isn’t it? Think of Perfume, the Japanese group they’re often compared to. Think of another Japanese act banking on kawaii, Kyary Pamyu Pamyu. The songs are tolerable yet admittedly disposable fluff, but it’s the personality (and the visuals) that really sell the song. But then again, I agree with Rainy, about Orange Caramel being able to stand on its own. I mean, I was listening to After School’s “First Love”, which is a good song, but, well… [NB]

“Be Natural” by Red Velvet featuring Taeyong | Last September I had Rainy write about five songs that I picked. We called it Swap Week. The deal – especially considering this was her idea in the first place – was that I would write about her five song picks in the future. That time is now. The song picks are inevitably Korean. We begin with Red Velvet’s cover of “Be Natural”, originally done by SES, arguably the first big Korean girl group. (While they blew up in the late 90s, this song was from their 2000 release A Letter From Greenland.) If you’re used to the wham-bang production of most K-pop – consider “Ice Cream Cake” – this is definitely an antidote, but I have to say I enjoyed the original more than the cover. I don’t know. Is it my expectations? Is it me feeling the cover is a bit forced? Is it because they didn’t really change much? What do I know? That’s also one thing you ought to expect in the next week. I may have written a bit about K-pop in the past few years, but my girlfriend is still the expert in this relationship. I am a noob. [NB]