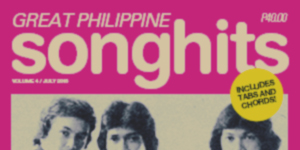 “Mambobola” by Zsa Zsa Padilla | My parents owned some of Zsa Zsa Padilla’s albums, but by then she was more known for her ballads and her ability to deliver those with her distinctly big voice. Do you call it big? I’m not sure if that’s the right adjective, but there was a sense of drama she lent to those songs that I don’t hear from many others here in the country. But her career stretches far back, of course, and it’s interesting to see the places she’s occupied in many distinct phases of Filipino music. She started her career with the seminal Hotdog at the tail end of the Manila Sound era, and by 1982 has ventured solo. “Mambobola”, released in 1986 – is Wikipedia right? I’ll assume yes – has sat nicely alongside her earlier ballads, and has endured long enough that you still hear her perform it these days. Says a lot about the longevity of one of our, admittedly, quieter musical legends this side of the world. [NB]