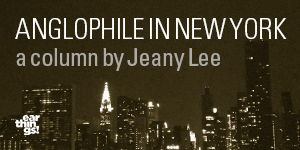 There was a time Niko and I never ever talked about Asian pop, even though we are both Asian. We were always talking about stuff like the Mystery Jets, Suede, and Ocean Colour Scene. This article is dedicated to our musical origins; and we must never forget them, EVER.

November 2016. There’s nothing quite like a Monday night when you have a full day of work and nice gig to look forward to. After work, I was looking forward to seeing Izzy Bizu at Gramercy Theater. A friend in London suggested I check her out. I’ve been listening to her music on Tidal and it’s the perfect blend of early Amy Winehouse and Adele – although she is more Amy than Adele.

I got to the venue early because, unlike Irving Plaza, Gramercy does not have a dedicated hotline stating the day’s set times. Sheesh, I think I have been calling the Irving Plaza set time hotline since 1996. It’s nice how some things never change. Anyway, I wasn’t going to miss Izzy one bit.

I noticed the marquee said “BBC MUSIC PRESENTS USA TOUR TONIGHT” and became a bit confused. It’s the sort of thing you’d see at the Roundhouse in Camden, North London (minus the USA TOUR part), not at Gramercy Theater in Kips Bay, Manhattan. Once I picked up my COMP tickets, I noticed the venue door had signs stating the show was being recorded for broadcast for BBC Radio 1.

I entered somewhere through Sundara Karma’s set after getting a drink and chatting with a family member of one of the members of Spring King. When I saw the band, I immediately noticed a neon BBC Music Presents sign and another sign saying “Music is Great: Britain and Northern Ireland” on the stage floor. I was laughing to myself and wondered what sort of alternate universe I was entering. Radio 1 in New York?

Where was I? Oh yes. Sundara Karma. Immediately I noticed Sundara Karma had this typical jangly guitar British sound (with hints of Kings of Leon) that I really like. They all dressed like rock stars, especially Oscar, the lead singer. He wore a long sleeved red laced shirt with brown bellbottom pants and a white furry coat. Very Keith Richards circa 1970s. I heard “She Said”, “Flame”, and “Love Blood”, which was so catchy. I wished I saw more of their set, but at least I was there in time for Izzy Bizu.

I’ve heard from many of my friends about Izzy. She’s a great singer songwriter from south west London of Ethiopian descent, with a similar sound to Emeli Sandé, Adele, and Amy Winehouse. It’s literally a no-brainer that Annie Mac’s championed her music early on since she has that perfect blend of soul, funk, and pop. At Gramercy, she brought the band with her and did a lively version of “White Tiger” and “Mad Behaviour”. It’s almost uncanny how well all her songs are performed live; Izzy’s live performance matches her studio recordings with a distinct and direct sound correlation.

The experience of seeing Izzy Live was way better than the first time I saw Adele at Joe’s Pub, and I can say that with absolute conviction. After her set, it was clear that the audience was mainly there to see her; half of Gramercy Theater left after the last song.

I wasn’t going to let my British night end so abruptly, so I decided to stay for Spring King. I chatted with the singer’s mum and she personally told me Spring King was the best band ever. Well, it turns out that this particular mum has a great ear for music; Spring King lived up to expectations, as expected!

I really loved “Detroit” and “Demons” live. I also bought their LP for $20, which saved me postage from Rough Trade London or train fare to Rough Trade Brooklyn.

After the gig, I finally talked to Huw Stephens – the host of Radio 1’s late night show – and told him how I’ve listened to him for years over the internet from New York. He was really nice and lovely to me. It was really surreal to actually meet someone I’ve been listening to for years abroad. I’ve trusted his taste in music for many years, and over the years it’s greatly influenced how I listen to music and decide what I like. Most of all, I was confused how easy it was to find him. I mean, in reality, I was in New York. I think if I were in London it would not have been that easy.

Radio 1 and I are in a close one-way friendship; it’s there when I need the perfect dose of indie rock and grime with lengthy and informative commentary. I decided to listen to Huw’s show the day after on playback, after coming home from Johnny Marr’s book discussion at Gramercy Theater. I listened to the show in it’s entirety; it was a radio show dedicated to New York which seemed more interesting than usual. My ears perked up; I wanted to hear how Huw and his team presented New York.

From what I recall, this show was VERY New York Centric. Huw and his team really did their pre-production research and really did a good job with the interviews with local influencers and bands. There were live tracks from show, and interviews with a writer for Rap Radar, Lio of Kanine Records at Rough Trade Brooklyn, and Sunflower Bean.

This particular show really hit home for me; ironically, this show was done at Sirius, mere blocks from my home. It was weird hearing something on Radio 1 that I just experienced the night before, and even stranger to hear an interview taking place at Rough Trade in Brooklyn, a place I frequent for UK vinyl. Lio and Huw had a conversation about the scene in Bushwick, and from what I remember, Lio talked about Shea Stadium, Sunnyvale, and Alphaville, all places I frequent to check out great bands like Best Behavior, Fruit and Flowers, and Honduras. That’s all a L train ride away from my home.

Huw then interviewed Sunflower Bean, one of my favorite psychedelic bands from NYC. I found out about that band very early in their career from my friend Alec. He used to bring me to all of Sunflower Bean’s early shows and was one of their biggest champions from day one. One thing I distinctly remember about the interview was Huw asking Julia, the band’s lead singer, what she was listening to lately. She talked about this band Kissing is a Crime and presented one of their songs. They’re a band on Don Giovanni Records, a record label I have heard of from the Chris Gethard scene. I think Chris released his comedy album on that label.

By the time the radio show was over, I was just amazed and embarrassed that BBC Radio 1 was right on the pulse of presenting Brooklyn counterculture and city music life to the youth a thousand times better than any radio station in NYC could.

March 2017. I listened to Huw’s show the day after that, and I remember they did an interview with Cipha Sounds and his podcast partner. Now that I look back on it, Huw just interviewed a bunch of people I’ve met in strange ways, or have talked to recently. Quite odd. I met Cipha and appeared on TV with him on The Chris Gethard Show many years ago. Over the past few years, I’ve become friendly with Sunflower Bean, as I just talked to the Julia and Nick at a London O’Connor and Honduras at Rough Trade recently. I even managed to find Lio while working at Rough Trade and we talked about Amazing Radio and a really good band called Beverly, a band he turned me onto.

For me, music counterculture is a way of life. It’s my lifestyle and I stand by it. I love checking out indie and electropop bands at Bowery Ballroom and ordering records from buzzed indie bands from abroad. Radio 1 has always had their pulse on it to find the next thing, or as Mistajam (and before him, Annie Mac, and before her, Zane Lowe) says, THE HOTTEST RECORD IN THE WORLD.

It’s really quite sad that a radio station from a foreign country can make local programming better than any New Yorker working in radio can. In the United States, radio is a massive sad state of affairs due to it’s hard-headed, stubborn mentality of “this is the way we do things, and this is how we will continue to do them,” that is spread through the entire industry like a cancer without a cure. There is a severe lack of innovation because most programming is pandered to a PPM in the hands of a random person with ADD, who will represent the tastes of 50,000 people in their demographic cohort for ratings. Oh, in some cities, callout research is still a THING to test playlist adds. (Barf.)

However, New York radio isn’t all bad. I think 1010 WINS has the best music; I’d rather listen to the song “you give us 22 minutes, we give you the world” with the ticker tape beat on repeat than hear presenters at Z100 shouting at you or hear a minute of Bore FM, I mean Lite FM (zzz).

Many years ago, when I was still working in US Radio, I gave a tour of my workplace to Phil Stocker, a producer at Radio 1. He was really nice and gracious about it. However, I was secretly embarrassed because the office culture was a stark difference to what I could imagine Radio 1 would be like. Years after that, Phil let me visit his offices in London. I saw Zane Lowe from a glass window and met a few people that worked there. My predictions were right. Sigh. [JL]